Eyes of a Child 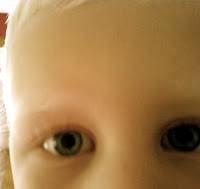 When my son Nicholas was small, about the age his son Max is now, and he was less than enamored with something--peas and other green things on his plate, shampoo in his hair, wind in his face--he wrinkled up his little nose, squinted his bright blue eyes, and, without moving his lips, forcefully whined, "I can't like that!" The phrase has come to my mind several times this week: the alternating Wednesday yoga teacher saying "lay" instead of "lie" at least a dozen times; and the unexpected Julie-substitute on Friday was...well, I won't even go there. The cold that was too intense to open the damper and build a fire. Working on a snow day (distinguishable from a snowy day in that schools and, as it turned out, my workplace closed) because I was at work before I knew I wasn't supposed to be able to safely get there--and because I had too much to do to indulge in the luxury of a day off. Learning through the movie channel that comes with my cheapest-possible cable package that yes, Virginia, there is indeed such a thing as Obama Chia Head, as well as Washington and Lincoln, and as a bonus, the Statue of Liberty. (They are available at K-Mart and various drug stores, if you are interested.) The list goes on, but I will stop there. I just needed to get it out so I can move on. 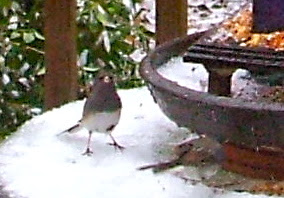 It's the last Sunday of Advent. Regardless of how I feel about Christmas--a difficult holiday for me because it does not match the perfect Rockwellesque scenario in my head--the baby will be born. In one of my favorite of Ann Weems' poems, she writes, "For someone on earth will see the star, someone will hear the angel voices, someone will run to Bethlehem, someone will know peace and goodwill: the Christ will be born!" It may or may not be me this year. But if I close myself off from the possibility, I won't notice it if it is. And new life will be born, even if I can't see it. According to the Christmas story, things were not exactly up to snuff for Mary and Joseph, either. But apparently they made the best of it. What if I try to view Christmas through a child's eyes? What if I let lie the adult knowledge of reality that taints everything, and look squint-eye at what is good and true in spite of it all? 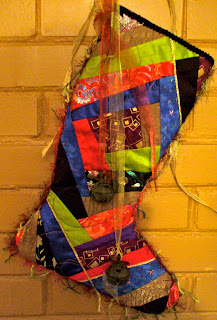 My favorite Christmas movie is "Miracle on 34th Street," the old one with Maureen O'Hara and young Natalie Wood. You know the story: six-year-old Susan doesn't believe in the miracle of Santa Claus that is every child's birthright and was stolen from her by her no-nonsense mother, until it is proven in a court of law. A child's  eyes see the wonder of Christmas. When we add grown-up knowledge we lose the ability to believe the impossible. My other favorite Christmas stories are "How the Grinch Stole Christmas" and "The Polar Express." The nameless boy in "The Polar Express" still hears the bell ring when he becomes a man, because he believes he will; and the Whos in Whoville find that Christmas lies within their hearts, and it cannot be stolen. 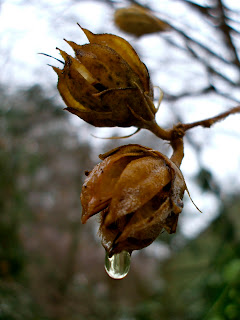 Faith (perhaps not unlike magic) is believing in things even when common sense tells us  not to. We know reindeer can't fly, we know there couldn't have been a virgin birth. But if we can go through our heart, instead of our brain where knowledge has crowded out the ability to believe in the magical, even as adults we can see the world as a child does. As I watch the seasons cycle, and the progression of plants come and go and come again in mental time lapse, how can I not believe in miracles? As I watch snowflakes drift through the air, examine ice-encased berries and branches and icicle droplets on branches this cold, cold week, I am in awe of creation. I think I would "can't like" to be a botanist or a meteorologist and have too much knowledge of exactly what reality makes that all happen. I would rather just see it as wonder. 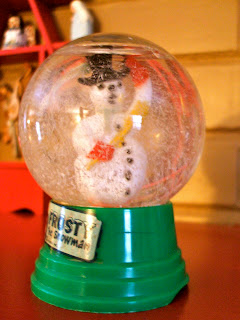 Every now and then this week I find myself thinking about Christmases past. One year, after all our presents were opened, and my sisters and I were completely satiated, my mother suddenly remembered gifts that had not shown up under the tree. She disappeared to her bedroom and returned with things long-hidden in the recesses of her closet that she had forgotten to wrap! If she felt bad about the imperfection of that, she needn't have. It is one of my most memorable Christmases. My big sister, five years older than I, as a teenager and beyond was the queen of creative wrapping. One year she put all her gifts in shoe boxes and decorated them like train cars and hooked them together under the tree. Now, as a knowledgeable and responsible adult, she puts gifts in reusable cloth bags. I know it's green--and I have used the bags, though not to regift as intended; one is in my suitcase for dirty traveling clothes and one holds my knitting needles--but I miss the creativity. Some bit of wonder is lost. And then there was the year 2-year-old Nicholas wanted an airplane. Those were the years I had more time and creativity than we had money. I don't know what exactly Nicholas had in mind, but I made him a very large, stuffed biplane with struts and propeller, and after he went to sleep on Christmas eve his dad and I hung it from the ceiling light in his room. On Christmas morning, we heard him stirring in his crib. We heard the crib rattle and squeak as he stood up. What followed was not his usual morning babble and the sound of pages of his books being turned, but a long moment of complete silence. And then, in soto voce, we heard, "It's an airplane!" The memory of that moment of his wonder, even as I write this, brings tears to my eyes. I was Santa that year. I don't think he had a clear picture of what he wanted, but I gave it to him. 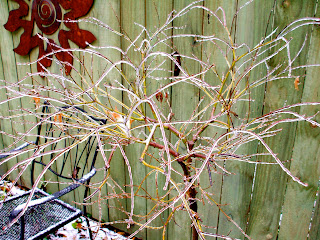 As a child I loved the traditional carols telling the familiar fairy-tale Christmas story. The story has it all: the impossible virgin-birth beginning, the simplicity and improbability of a king born in a stable to ordinary parents and welcomed into the world by animals; the happy-ever-after-ness of angels, adoring fans, and expensive gifts. I didn’t notice in my youth, though, that the familiar carols often underplay or entirely leave out the darkness of the fairy tale archetype: a frightening and confusing pregnancy, difficult travel, full hotels, a child giving birth to a baby, and an evil king. I realize now that it is the darkness out of which miracles are born that may be the most important part of all our stories. A carol I most love now is "In the Bleak Midwinter." The words speak to me of the beauty and love that can come unexpectedly in the midst of imperfect times. It calls me to let loose of what I cannot do or have; to let go of fear and anxiety; to trust in a God who loves and cares for me, and who reveals the More through the love of friends; and to embrace the magical wonder of this season. 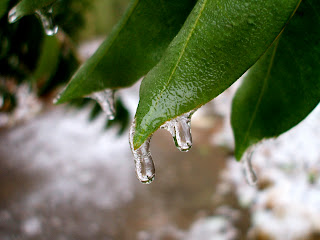 What can I like this Christmas? My children and their significant others, and beautiful child Max will spend some time with me. How about instead of lamenting that it won't be as much time as I would like and won't look the way I wish it did, I let it be whatever it is? I get some time off from work before the month from hell. What if I enjoy the needed break and not worry about what awaits me on the return? Although I didn't much feel up to it at the time, I issued invitations for a winter solstice party. Now I am so glad I didn't let my annual impending holiday gloom dictate what I might need a month later. What better way to celebrate the season than a candlelight gathering on the longest night of the year with those dear to me. 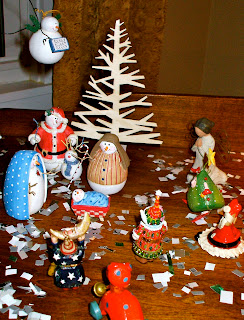 As I sit at my cafe table writing this, a text message comes in from a dear friend, that blows me away. How does she know? Now that is magical. She writes: "Ring the bells that still can ring; forget your perfect offering. There is a crack in everything, that's how the light gets in." (Leonard Cohen) As we look out from the dark night of our soul, the light of the Christ child enters in--through the crack--softly and quietly as a mother’s kiss.
Posted by Gretchen Staebler