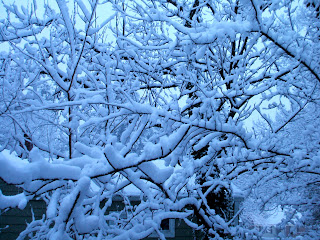 I awoke to six inches of snow, and it is still falling. It is mystical, magical, serene, silent, and beautiful. The cafe is taking a snow day. I'm a little discom- bobulated. I have not sat at my kitchen bar to write this blog. I'm not sure I can put the words together here! I was all set to venture out in my all-wheel drive--looking forward to it actually. The scone and coffee don't taste quite the same here. Regroup. 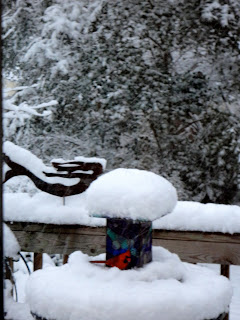 Last week the yoga teacher led us into a painful contortion of some sort, I don't remember the name of the pose, but it involved hips and was one of those "you've got to be kidding" moments. She said, "Settle in. Get comfortable." Right. She knew we were thinking that because she laughed and admitted it was not a comfortable position, but to "try to find some comfort in an uncomfortable place." So when, on Christmas Eve, the meditation at church was about finding light in the darkness, I had already been considering what that meant to me. 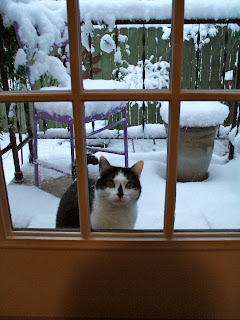 There has been a lot of darkness in my life the past two decades. And a lot of light. It is more my nature to dwell on the light, which is a good thing. But I have been learning that the darkness cannot be locked in a closet. It can be a good thing to acknowledge it. I am also not a Pollyanna, finding the goodness in everything. For me that is not a healthy place. There is darkness, and it does little good to try to circumvent it. Light may come from the darkness; maybe come because of it. But dark is dark. And uncomfortable is uncomfortable. Learning to see in the dark is my aspiration. As I sit at my counter looking out at the snow piled on the slender tree branches, every now and then it gets too heavy, or the wind blows with a bit more force, and in a silent "whoosh" the branches dip and bushels of snow fall to the ground. My personal darkness is kind of like that; when it has been enough, when I have learned all I can from it, it lets go and the light returns. But first, I have to learn to see in the dark. 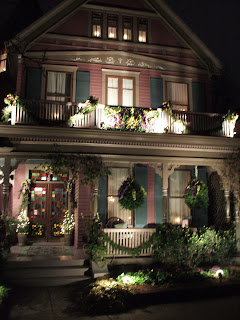 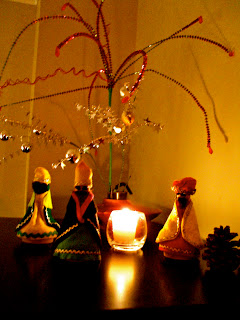 This morning I have watched the birds at the feeder, their tiny bodies finding the small space under the feeder's overhang. My cat, Smudge, truly thought she wanted to go outside, and she crept down the inner edge of the steps protected from the snow under the overhang of the roof. Finding comfort in the uncomfortable. I looked around at the flickering candles in the darkened sanctuary on Christmas Eve, lighting the faces of all of us--those who are living in the light and those who are drowning in the dark. The light of the Baby found all of us. And in all of us is the light. On the way I home, I walked down the streets in Raleigh's historic district near my home and looked at the strings of light illuminating the darkness outside the houses. Regardless of what might have been going on inside, they were bejeweled. I arrived at my little house sitting in the dark with candles in the windows and Christmas tree lights glowing from within. Light in the dark. I thought of the shepherds and the wiseones following the star to the Babe who was to save the world from the dark; but we can't be saved, not really. At least we can't make it go away. The dark will always be with us. But we can bring light into a dark world. And that is what the One who is More brings us--and it shines through us. Early last Tuesday morning, at the beginning of the shortest day of the year, I watched the earth's shadow darken the full moon. Though I didn't see it, because the clouds rolled in and obscured the rest of the event, I know that the shadow kept on moving and eventually the light came out on the other side. And that is the way of the dark. Sometimes there is darkness in our lives, but we learn to see what light there is in spite of the dark; and eventually the fullness of light comes back on the other side and shines into the dark night. 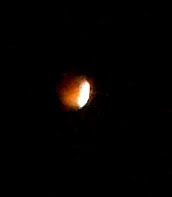 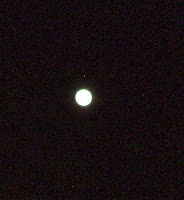 I sat on the porch step
wrapped in a blanket
against the cold
early this morning and
watched the earth’s shadow
darken the moon.

The last time it
happened on the
shortest day of the year,
the pilgrims
were the watchers.

In the distance
revelers
out for the event
made their whooping
presence known
and dogs howled
along with them
as the moon disappeared.

A cat crept across a
porch
and a silhouetted figure pulled
back a curtain and
peered out
then came out the door
looked up
and went back inside.
Look at lunar eclipse.
Check.

I watched the sliver of
moonlight grow smaller
and smaller until
the eclipse was
total
the only light
a ring around
the edge.

My cat clawed
at the door
not comprehending why
I left the warm bed and
was out in the dark
and the cold.
But when I came in
wouldn’t I like to give
her some food.
As long as
I was up.

On TV later
an astronomer was
trying to explain the
event
but Matt was making
such fun and
laughing
at what the astronomer
was forced to call the most
boring of all
galactic events,
that I couldn’t make
heads nor tails of
the explanation.
And it pissed me off
that they were
making
light of the
dark.

I just know the moon
went dark
and it doesn’t happen
everyday
and it got me up
out of the comfort of bed
to the porch step
in the cold and the dark
to bear witness. 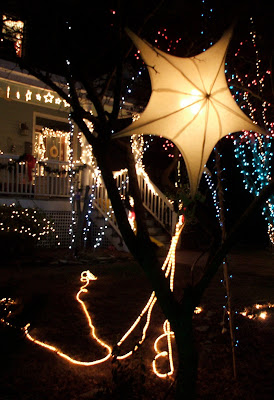 I'm jealous that you were able to watch the eclipse! I love witnessing "big" - whether it's something with the stars and planets or big spaces like Yosemite - the grand provides perspective, in other words: you big, me and my worries, not so much!! Happy New Year Gretchen!