It is peculiar living in the house of my childhood. I am tossed back and forth between the past and the present, and I sometimes daydream of an imaginary future－what might it look and feel like if it were really my home and not my mother's. 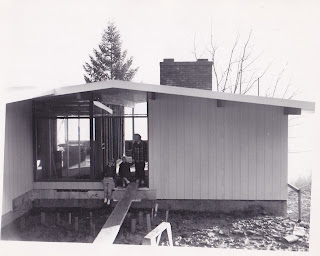 The first seven stairs from the basement to the landing still creak, the next seven up to the main floor do not. I still sneak up them sometimes, skipping treads on the lower set and stepping lightly, not wanting to wake my mother, even though there is no longer any chance of it, her hearing aid on the bedside table.

The oil furnace in the laundry room next to my bedroom bangs and groans as it comes on, the aluminum expanding with the sudden blast of heat at 6 a.m. every morning, summer and winter; no need to consult the clock. Voices still carry through the heat registers between the floors, mostly my mother’s on the phone or with her morning caregiver; sometimes I can almost hear my father’s voice, long silenced. The voices and footfalls and kitchen sounds no longer wake me up, as I rise before my mother these days. And now also I hear my mother’s night breathing through the baby monitor that connects my bedroom downstairs to her’s upstairs, a stark reminder of what has changed. 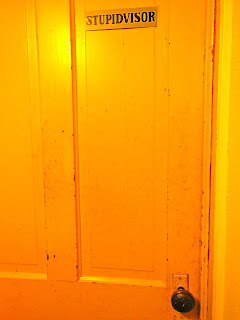 The old paneled door on my father’s original workshop, unlike the hollow modern doors in the rest of the house, was salvaged from somewhere or other and still squeaks as it always has; the ill-fitting knob still rattles. It still has the “Stupidvisor” sign on it－one end attached with a tack, one end taped－we children thought so hilarious when we gifted him with it, letting him know that he may be in charge at his work, but at home he was just our funny daddy. Each time I open that door the sound is as familiar to me as my own voice. My mother says she thinks she will ask Dan to paint it. Why, I ask, after half a century in this house and who knows how long in its previous life? I tell her I like it as it is, with all its history.

The room itself no longer smells of sawdust and varnish, since Daddy moved his shop to a new space over the carport after he retired, and it became my mother’s craft room with its worktable bought from JC Penney where it displayed bolts of fabric before Penney's moved out of downtown Centralia. Now the room is mostly storage (as is the replacement workshop). A shelf still stores the white-painted, compartmented wood boxes Daddy made to hold our camp kitchen needs; long empty. The pegboard with my organized father's outlines of the tools that used to hang there, the ghosts of what was, occupies the wall next to the workbench that still holds miscellaneous screws and string and things in its drawers. 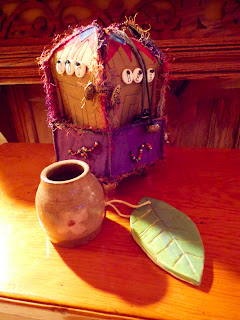 The house is a museum of my dabbling life in arts and crafts: the first grade plaster imprint of my hand, over my mother’s dresser; the clay leaf I made in fourth grade art and the tiny vase I made on the wheel in a community art class after I moved across the country, on the shelf above the kitchen desk; the stenciled letter holder and the paperweight (I suspect it is really an ashtray–how the times have changed) with my 5th grade school picture behind the glass, on the desk; the glazed clay tiles stamped with things found in nature hanging on the wall – a 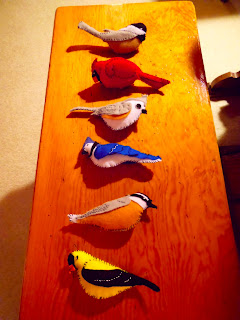 project I found in Better Homes and Gardens when my first child was a baby; the crewel pillow (the only crewel I ever did) in the chair in the guest room; the work of my cross-stitch period after my second child was born, mostly moved－thankfully－to less prominent spots; the photo art quilt of my parents’ courtship and favorite places, on the headboard of my mother’s bed and 3-D fabric art, on the organ shelf－empty nester projects. And, still at it, the felt birds I just completed to hang from the dining room light fixtures that my father created.

Much has changed over the years, too: the floor coverings, the painted, papered, and back to painted walls; the addition of blinds on the windows that span the front of the house; most but not all the furnishings; repurposed rooms. Newer pots and pans have joined the old Revereware, crowding the cabinets because nothing is thrown out. 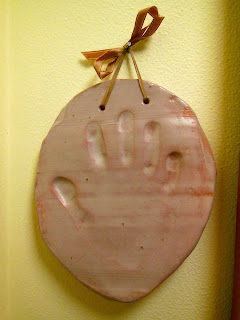 In spite of all that is the same and all that gradually changed over time, though, in these past nine months, it has come to feel like my current home more than my childhood home. Perhaps that’s a good thing, since it is my home right now; but I do kind of miss returning to that other home once or twice a year and being thrown into the past.

Come back tomorrow and I will take you outside.
Posted by Gretchen Staebler