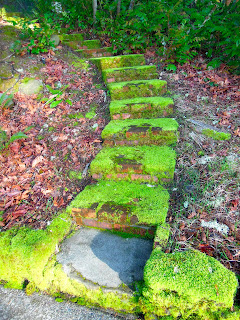 I finally got back to the soil on the spectacular Saturday afternoon last. I cleaned out the garden my sister built, then left five years ago. There is more clean up in a garden in the woods than in the sedate city garden: fir cones and twigs that break off the brittle lichen-covered maples in the winds that howl as they sweep across the side of the hill all winter. 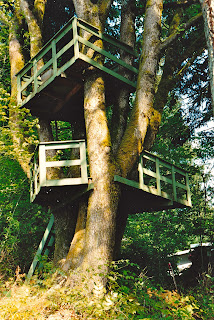 While the inside of the 50-year-old, 60s-modern house has had several changes over the years (Fragments 1), as I work I note that the outdoor landscape that my parents created with love shows the passage of time. The heavy wheelbarrow purchased before lighter weight materials were created. The moss- and lichen-covered old trees that used to be moss- and lichen-covered young trees. 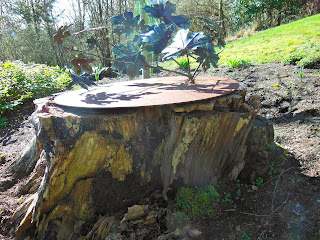 The big leaf-maple memorial sculpture that sits on the stump of the tree my father climbed to see the view of Mt. St. Helens before he chose this property and that I climbed as a child. The mountain itself, a third shorter than it used to be. The birch tree my parents planted soars into the clouds now. The brick steps that I helped my father build are covered with moss. The crossbeam bolted between two trees no longer holds the high-flying wooden seat and rope swing. 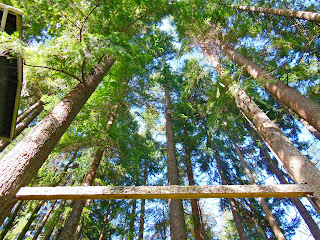 There is no longer a treehouse in the maple tree at the edge of the property, built for the grandchildren so long ago that it rotted out. The fire pit where many a salmon cooked over the coals was long ago filled in, I don’t know why. Just above it, up the slope, is the spot that used to be occupied by the oil drum we burned the trash in. The acrid smell of the narrow plume of smoke as it drifted up into the atmosphere while I watched it burn down to ash comes back to me now. It was one of my favorite chores because it took me outside, and what child doesn’t love fire? 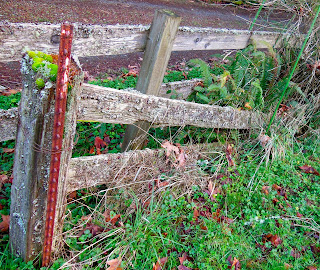 The chalet barn for our fat brown-on-white pinto mare, Scout－who moved to a retirement farm after we children all left－the white scrolled balcony now absent, rotted and on the ground below. A quarter of her pasture has returned to forest. The section of original fence left behind the new fence that now looks old and that my father and my teenaged son－who now has two sons of his own and lives on the side of a hill in the Appalachian Mountains－were building when my dad went inside with chest pains, three days before he died. 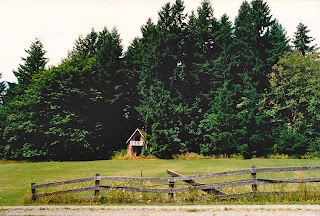 The trees on the hillside adjacent to our property that my sisters and I hiked and played in－another owner’s cash crop－were clearcut many years ago. I was home for a visit when the chain saws started, a sound I could hear in my chest that hurt my heart and made me weep in sorrow. The west view is better now. The barn no longer sits in front of a dense woods, but is backdropped by a fistful of firs that my father traded for a few he owned elsewhere. The noble fir by the driveway that I recall some worry over－that it would be poached for a Christmas tree－is, well, no longer a concern. 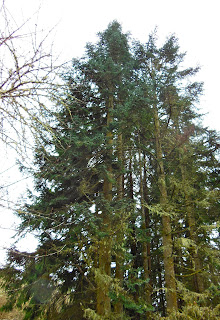 My children don’t have a childhood home, we moved so often. They were not even born in the same state. I am sad for them, and glad for the summers they spent at mine and the memories of their own made here, with their Nana and Papa, on the side of the hill.

My childhood was beloved. This home on the hill, built and tended with love and care by my parents, is beloved by all of my family and continues to serve well. If it could talk, it would say:

And did you get what
you wanted from this life, even so?
I did.
And what did you want?
To call myself beloved, to feel myself
beloved on the earth.
(Late Fragment by Raymond Carver)

This looks like a lovely place to wander and think.

I love Ray Carver. He spoke the truth. Looks like a beautiful place.

I love Ray Carver. He spoke the truth. Looks like a beautiful place.